One way of looking at this result is that, since odds ratios are equivalent under multiplication by a positive constant, we can fix the right side of the odds ratio as equaling 1 and ask about what’s on the left side. This is what we do when seeing the calculation as \((0.25 : 1) \cdot (3 : 1) = (0.75 : 1),\) the form suggested by the theorem proved above. 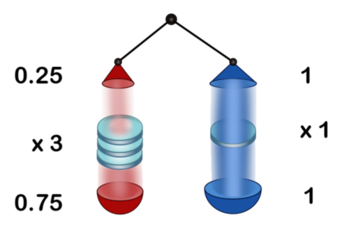 Note the similarity to a waterfall diagram. The main thing the spotlight visualization adds is that we can imagine varying the absolute intensities of the lights and lenses, while preserving their relative intensities, in such a way as to make the right-side beams and lenses equal 1.

draw the pre-proportional, odds form of the spotlight visualization.

The proportional form of Bayes’ rule is perhaps the fastest way of describing Bayesian reasoning that sounds like it ought to be true. If you were having a fictional character suddenly give a Bayesian argument in the middle of a story being read by many people who’d never heard of Bayes’ rule, you might have them say:

Visual diagrams and special notation for odds and relative likelihoods might make Bayes’ rule more intuitive, but the proportional form is probably the most valid-sounding thing that is quantitatively correct that you can say in three sentences.