Bayesian reasoning is about how to revise our beliefs in the light of evidence.

We’ll start by considering one scenario in which the strength of the evidence has clear numbers attached.

Suppose you are a nurse screening a set of students for a sickness called Diseasitis.noteLiterally “inflammation of the disease”.

You are testing for Diseasitis using a color-changing tongue depressor, which usually turns black if the student has Diseasitis.

One of your students comes into the office, takes the test, and turns the tongue depressor black. What is the probability that they have Diseasitis?

(If you think you see how to do it, you can try to solve this problem before continuing. To quickly see if you got your answer right, you can expand the “Answer” button below; the derivation will be given shortly.)

The probability a student with a blackened tongue depressor has Diseasitis is 3⁄7, roughly 43
. %

This problem can be solved a hard way or a clever easy way. We’ll walk through the hard way first.

First, we imagine a population of 100 students, of whom 20 have Diseasitis and 80 don’t.noteMultiple studies show that thinking about concrete numbers such as “20 out of 100 students” or “200 out of 1000 students” is more likely to produce correct spontaneous reasoning on these problems than thinking about percentages like “20% of students.” E.g. “Probabilistic reasoning in clinical medicine” by David M. Eddy (1982). 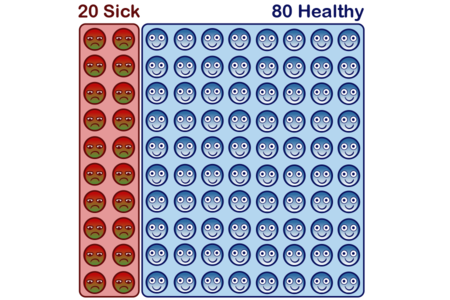 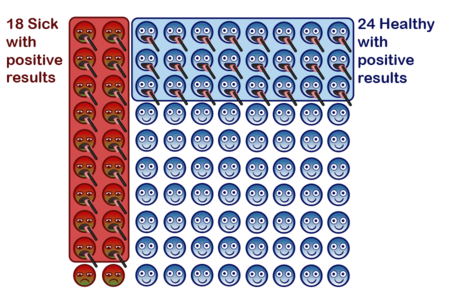 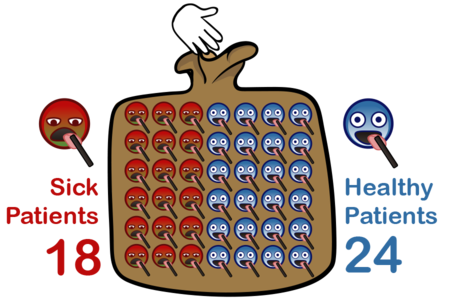 Many medical students have at first found this answer counter-intuitive: The test correctly detects Diseasitis 90% of the time! If the test comes back positive, why is it still less than 50% likely that the patient has Diseasitis? Well, the test also incorrectly “detects” Diseasitis 30% of the time in a healthy patient, and we start out with lots more healthy patients than sick patients.

The test does provide some evidence in favor of of the patient being sick. The probability of a patient being sick goes from 20% before the test, to 43% after we see the tongue depressor turn black. But this isn’t conclusive, and we need to perform further tests, maybe more expensive ones.