If we consider the waterfall visualization of the Diseasitis example, then we can visualize how relative odds are appropriate for thinking about the two rivers at the top of the waterfall. 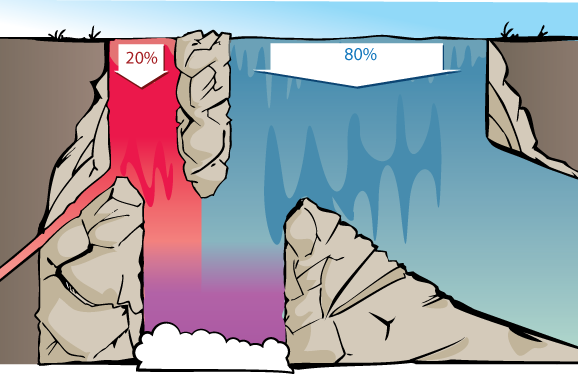 This justifies throwing away the specific data that 90% of the red stream and 30% of the blue stream make it down, and summarizing this into relative likelihoods of (3 : 1).

In general, the strength of evidence is summarized by how relatively likely different states of the world make our observations.

To state Bayes’ rule in full generality, and prove it as a theorem, we’ll need to introduce some new notation.

In other words, \(X\) is something that’s either true or false in reality, but we’re uncertain about it, and \(\mathbb P(X)\) is a way of expressing our degree of belief that \(X\) is true. A patient is, in fact, either sick or healthy; but if you don’t know which of these is the case, the evidence might lead you to assign a 43% subjective probability that the patient is sick.

The Diseasitis involved some more complicated statements than this, though; in particular it involved:

In these cases we want to go from some fact that is assumed or known to be true (on the right), to some other proposition (on the left) whose new probability we want to ask about, taking into account that assumption.

This standard notation for \(\mathbb P(X \mid Y)\) meaning “the probability of \(X\), assuming \(Y\) to be true” is a helpfully symmetrical vertical line, to avoid giving you any visual clue to remember that the assumption is on the right and the inferred proposition is on the left. <sarcasm>

We can see the law of conditional probability as saying, “Let us restrict our attention to worlds where \(Y\) is the case, or thingies of which \(Y\) is true. Looking only at cases where \(Y\) is true, how many cases are there inside that restriction where \(X\) is also true—cases with \(X\) and \(Y\)?”

For more on this, see Conditional probability.

In the Diseasitis example, this would state:

The posterior odds are the relative proportions of sick vs healthy patients among those with positive test results, or \(\frac{\mathbb P(sick \mid positive)}{\mathbb P(healthy \mid positive)} = \frac{3}{4}\), aka \(3 : 4\) odds.

To extract the probability from the relative odds, we keep in mind that probabilities of mutually exclusive and exhaustive propositions need to sum to \(1,\) that is, there is a 100% probability of something happening. Since everyone is either sick or not sick, we can normalize the odd ratio \(3 : 4\) by dividing through by the sum of terms: 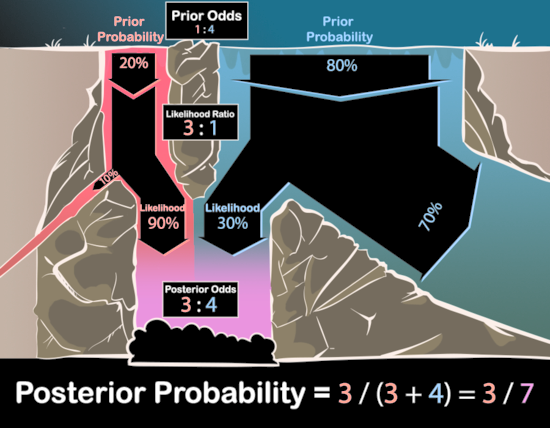 We can generalize this to any two hypotheses \(H_j\) and \(H_k\) with evidence \(e\), in which case Bayes’ rule can be written as:

If \(H_j\) and \(H_k\) are mutually exclusive and exhaustive, we can convert the posterior odds into a posterior probability for \(H_j\) by normalizing the odds—dividing through the odds ratio by the sum of its terms, so that the elements of the new ratio sum to \(1.\)

Then this is a proof of Bayes’ rule:

In the Diseasitis example, these proof steps correspond to the operations:

Using red for sick, blue for healthy, grey for a mix of sick and healthy patients, and + signs for positive test results, the calculation steps can be visualized as follows: 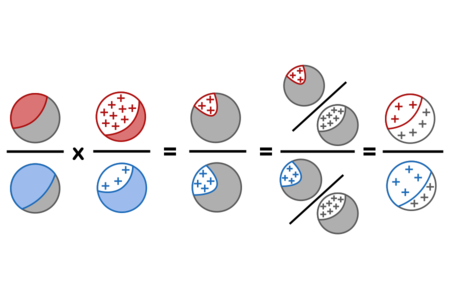 todo: maybe replace this diagram with pie-chart circles in exactly right proportions (but still with the correct populations of + signs)

This process of observing evidence and using its likelihood ratio to transform a prior belief into a posterior belief is called a “Bayesian update” or “belief revision.”

if-before(Extraordinary claims require extraordinary evidence): Congratulations! You now know (we hope) what Bayes’ rule is, and how to apply it to simple setups. After this, the path continues with further implications %if-before(Bayes’ rule: Vector form): and additional forms% of Bayes’ rule. This might be a good time to take a break, if you want one—but we hope you continue on this Arbital path after that!
!if-before(Bayes’ rule: Vector form):
Eliezer Yudkowsky8 Feb 2016 5:13 UTC