Here are a handful of examples of how the logarithm base 10 behaves. Can you spot the pattern?

Every time the input gets one digit longer, the output goes up by one. In other words, the output of the logarithm is roughly the length — measured in digits — of the input. (Why?)

If you aren’t familiar with the idea of numbers represented in other number bases besides 10, and you want to learn more, see the number base tutorial.

Here’s an interactive visualization which shows the link between the length of a number expressed in base \(b\), and the logarithm base \(b\) of that number:

Pretty close, but not exactly. The most obvious difference is that the outputs of logarithms generally have a fractional portion: the logarithm of \(x\) always falls a little short of the length of \(x.\) This is because, insofar as logarithms act like the “length” function, they generalize the notion of length, making it continuous.

What does this fractional portion mean? Roughly speaking, logarithms measure not only how long a number is, but also how much that number is really using its digits. 12 and 99 are both two-digit numbers, but intuitively, 12 is “barely” two digits long, whereas 97 is “nearly” three digits. Logarithms formalize this intuition, and tell us that 12 is really only using about 1.08 digits, while 97 is using about 1.99.

Well, here’s one way to approach the notion of a “partial digit.” Let’s say that you work in a warehouse recording data using digit wheels like they used to have on old desktop computers. 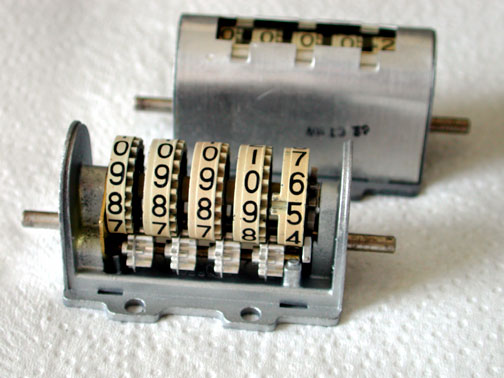 Let’s say that one of your digit wheels is broken, and can’t hold numbers greater than 4 — every notch 5-9 has been stripped off, so if you try to set it to a number between 5 and 9, it just slips down to 4. Let’s call the resulting digit a 5-digit, because it can still be stably placed into 5 different states (0-4). We could easily call this 5-digit a “partial 10-digit.”

The question is, how much of a partial 10-digit is it? Is it half a 10-digit, because it can store 5 out of 10 values that a “full 10-digit” can store? That would be a fine way to measure fractional digits, but it’s not the method used by logarithms. Why? Well, consider a scenario where you have to record lots and lots of numbers on these digits (such that you can tell someone how to read off the right data later), and let’s say also that you have to pay me one dollar for every digit that you use. Now let’s say that I only charge you 50¢ per 5-digit. Then you should do all your work in 5-digits! Why? Because two 5-digits can be used to store 25 different values (00, 01, 02, 03, 04, 10, 11, …, 44) for $1, which is way more data-stored-per-dollar than you would have gotten by buying a 10-digit.noteYou may be wondering, are two 5-digits really worth more than one 10-digit? Sure, you can place them in 25 different configurations, but how do you encode “9″ when none of the digits have a “9” symbol written on them? If so, see The symbols don’t matter.

We now begin to see what the fractional answer that comes out of a logarithm actually means (and why 300 is closer to 2.5 digits long that 500 is). The logarithm base 10 of \(x\) is not answering “how many 10-digits does it take to store \(x\)?” It’s answering “how many digits-of-various-kinds does it take to store \(x\), where as many digits as possible are 10-digits; and how big does the final digit have to be?” The fractional portion of the output describes how large the final digit has to be, using this natural exchange rate between digits of different sizes.

This raises a number of additional questions:

Answer: The natural exchange rates between digits is actually way more interesting than it first appears. If you’re trying to store either “301” or “400“, and you start with two 10-digits, then you have to purchase a 4-digit in both cases. But if you start with a 10-digit and an 8-digit, then the digit you need to buy is different in the two cases. In the “301” case you can still make do with a 4-digit, because the 10, 8, and 4-digits together give you the ability to store any number up to \(10\cdot 8\cdot 4 = 320\). But in the “400” case you now need to purchase a 5-digit instead, because the 10, 8, and 4 digits together aren’t enough. The logarithm of a number tells you about every combination of \(n\)-digits that would work to encode the number (and more!). This is an idea that we’ll explore over the next few pages, and it will lead us to a much better understanding of logarithms.

Question: Hold on, where did the 2.60 number come from above? How did you know that a 5-digit costs 70¢? How are you calculating these exchange rates, and what do they mean?

Answer: Nice catch! The length interpretation crashes and burns when the inputs are less than one.

The “logarithms measure length” interpretation is imperfect. The connection is still useful to understand, because you already have an intuition for how slowly the length of a number grows as the number gets larger. The “length” interpretation is one of the easiest ways to get a gut-level intuition for what logarithmic growth means. If someone says “the amount of time it takes to search my database is logarithmic in the number of entries,” you can get a sense for what this means by remembering that logarithmic growth is like how the length of a number grows with the magnitude of that number:

The interpretation doesn’t explain what’s going on when the input is fractional, but it’s still one of the fastest ways to make logarithms start feeling like a natural property on numbers, rather than just some esoteric function that “inverts exponentials.” Length is the quick-and-dirty intuition behind logarithms.

Next up, we’ll be exploring this idea of an exchange rate between different types of digits, and building an even better interpretation of logarithms which helps us understand what they’re doing on fractional inputs (and why).