Given an associative operator \(\cdot\) and a list \([a, b, c, \ldots]\) of parameters, all ways of reducing the list to a single element by combining adjacent pairs yield the same result. In other words, while associativity only talks about the behavior of \(f\) when combining three elements, this is sufficient to ensure that \(f\) has similar good behavior when combining arbitrarily many elements

Visually, given an associative function \(f\), there are five ways to use three copies of \(f\) to combine four inputs into one output: 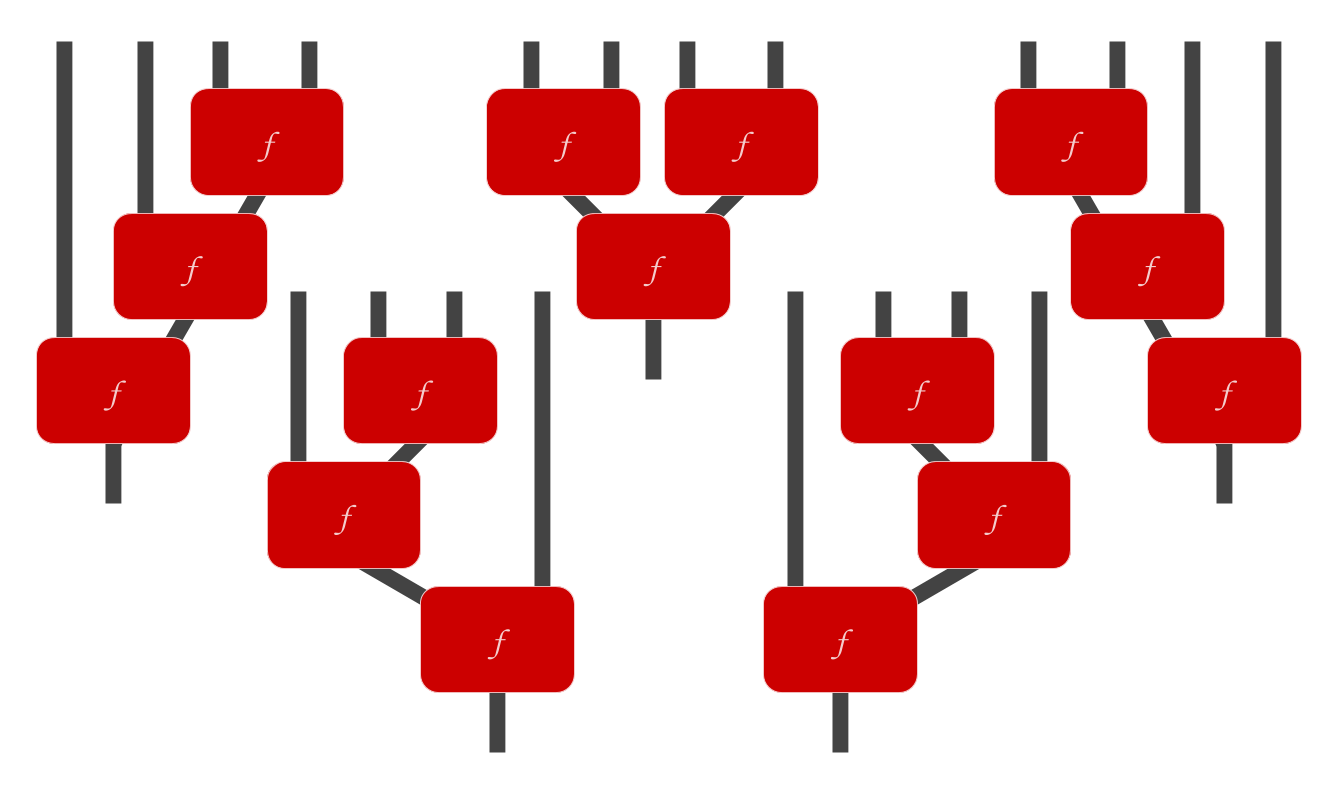 Associativity of \(\cdot\) lets us shift parenthesis to the left or right when manipulating expressions that use \(\cdot\) multiple times in a row, because associativity says that \((x\cdot y) \cdot z = x \cdot (y \cdot z).\) Abbreviating \(x \cdot y\) as \(xy,\) we can use this rule to prove the generalized associative law.

Let a “reduction path” of a list \([a, b, c, d]\) be an expression of the form \(a(b(cd)),\) where the parenthesis tell us explicitly how to use applications of \(\cdot\) on adjacent elements to combine the elements of the list into a single output. To prove the generalized associative law for lists of length 4, observe that any reduction path can be turned into any other, by repeatedly shifting the parenthesis left or right. For example:

Furthermore, whenever we want to use an associative function to reduce a list to a single element, we can do so in a “local” fashion, by repeatedly combining adjacent elements in the list, without worrying about the order in which we do so. This is certainly not true for all functions that reduce a list to a single output! For example, consider the function adjacent_ones which takes a list of ones and zeroes and produces a 1 if the list contains any adjacent ones, and a 0 otherwise. adjacent_ones(0,0,0,1,1,0)=1, but we can’t compute this result by just combining adjacent elements pairwise willy-nilly: If we use the order ((00)(01))(10) we get the answer 0, when the correct answer is 1.

Associative functions are precisely those that give rise to a family of functions for reducing lists where the result can be computed by just combining adjacent elements pairwise willy-nilly. Thus, associative operators describe list operations that can be computed locally, only ever looking at two adjacent elements, without worrying that some important global structure (such as “are there two ones in a row?”) will be destroyed.

What about empty lists?

Any associative function \(f\) can be used to reduce a non-empty finite list to a single element, by repeatedly applying \(f\) to adjacent elements, without worrying about the order. This works for one-element lists, despite the fact that \(f\) takes two parameters, because for one-element lists we can just use zero applications of \(f\). But what about zero-element lists?

To create a family \(f_n : X^n \to X\) of functions on lists with the nice locality properties discussed above for all \(n \ge 0,\) we need some “canonical” element of \(0_X\) in \(X\) that \(f_0\) can return given an empty list, such that \(0_X\) “acts like an empty element” with respect to \(f.\) Monoids formalize this notion of “an associative operator plus an element that acts like an empty element,” and thus, they capture the idea of a family of functions that can reduce any list (of finite size) to a single output, regardless of what order adjacent elements are combined in.