Universal property of the product

The motivating example here is the product of two sets.

Remember, the product of two sets \(A\) and \(B\) consists of all ordered pairs, the first element from \(A\) and the second element from \(B\). Category theory likes to think about maps involving an object rather than elements of an object, though, so we’d like a way of thinking about the product using only maps.

What else do we know about the product? To try for a universal property, we’re going to want to talk about all the maps involving the product. It turns out that the correct fact to note is that a map \(f\) from any set \(X\) to \(A \times B\) may be defined exactly by the first coordinate and the second coordinate of the result. Concretely, if we know \(\pi_A(f(x))\) and \(\pi_B(f(x))\), then we know \(f(x)\): it’s just \(\langle \pi_A(f(x)), \pi_B(f(x)) \rangle\). noteI’ve used \(\langle \text{angled brackets}\rangle\) to indicate the ordered pair here, just because otherwise there are confusingly many round brackets.

From the above, we can extract the following universal property, which really does define the product (up to isomorphism):

If you’re anything like me, you’re probably a bit lost at this point. Trust me that once you’ve set up the right structures in your mind, the property is quite simple. At the moment it probably feels more like I’ve given you a sentence in Swahili, and I’ve just told you it doesn’t mean anything difficult.

Category theory contains lots of things like this, where it takes a lot of words to write them out and some time to get your head around them properly. noteIn this particular instance, one unavoidable annoyance is that the object \(X\) isn’t really playing any interesting role other than “domain of an arbitrary function”, but we have to include the words “for every object \(X\)” because otherwise the definitions of \(f_A\) and \(f_B\) don’t make sense. One learns category theory by gradually getting used to examples and pictures; in particular, the idea of the commutative diagram is an extremely powerful tool for improving understanding.

The following “commutative diagram” (really just a picture showing the objects involved and how they interact) defines the product. 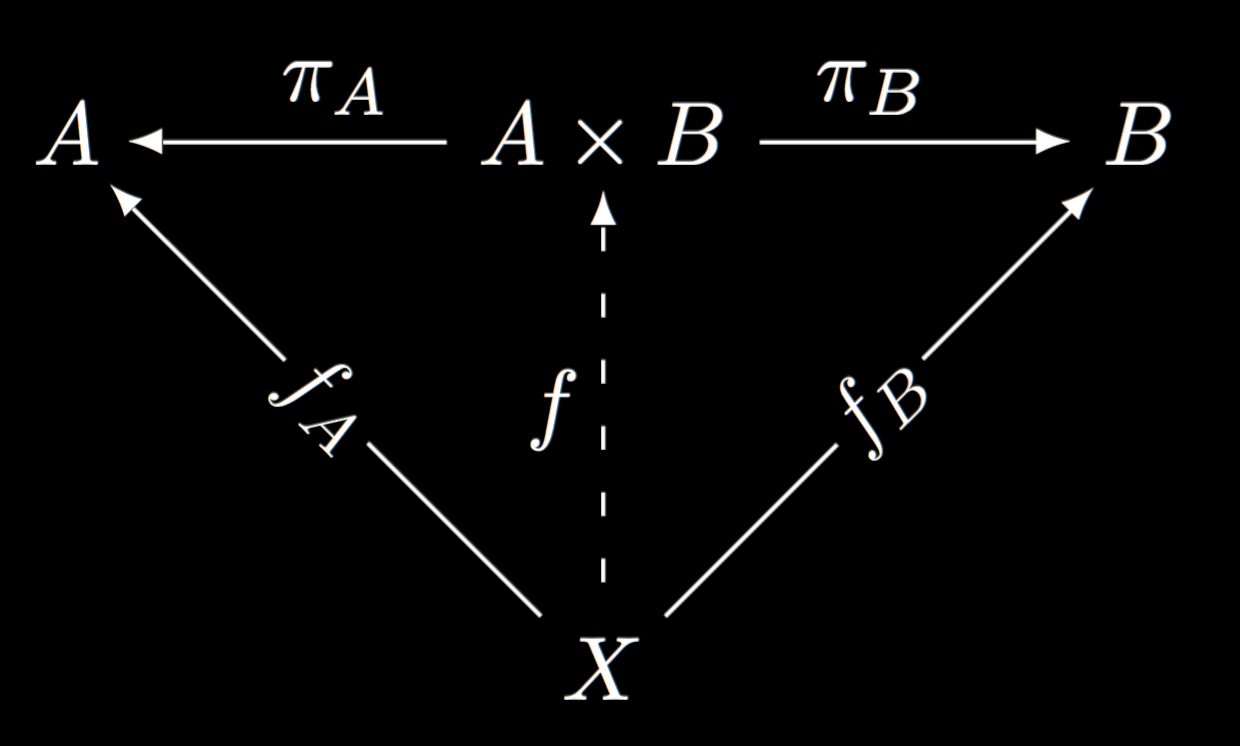 The dashed arrow indicates “the presence of all the other arrows forces this arrow to exist uniquely”; and the diagram is said to commute, which means that if we follow any chain of arrows round the diagram, we’ll get the same answer. Here, “the diagram commutes” noteThat is, “the diagram is a commutative diagram”. is exactly expressing \(\pi_A \circ f = f_A\) (following one of the triangles round) and \(\pi_B \circ f = f_B\) (following the other triangle). And the dashed-ness of the line is exactly expressing the words “there is a unique map \(f: X \to A \times B\)”.

We’ll see several examples now, some related to each other and some not. Hopefully in working through these, you will pick up what the property means; and maybe you will start to get a feel for some underlying intuitions.

(This discussion works just as well in the category of all sets, not just the finite ones, but finite sets are much easier to understand than general sets.)

Let \(A\) and \(B\) be finite sets; we want to see what \(A \otimes B\) noteBecause \(\times\) already has a meaning in set theory, we’ll use \(\otimes\) to distinguish this new concept. Of course, the aim of this section is to show that \(\otimes\) is actually the same as our usual \(\times\). is (using the universal-property definition), if it exists.

Let’s try and identify what set this universal property describes noteIf such a set exists. (Spoiler: it does.). The property is very general, talking about the entire “universe” of finite sets, so to get a grasp of it, it should help to specialise to some simple sets \(X\).

You might like to work out for yourself why letting \(X = \emptyset\) doesn’t tell us anything about \(A \otimes B\).

Specialising to this instance of \(X\), then, the universal property requires that:

We’ll examine what the category-theoretic product means in this category, and hopefully this should help indicate how versatile the “universal property” idea is.

The universal property of the category-theoretic product noteI’ll emphasise “category-theoretic” in this section, because it will turn out that in this context, “product” doesn’t mean “usual product of natural numbers”. here is:

Given natural numbers \(m\) and \(n\), we define the category-theoretic product \(\otimes\) noteBecause \(\times\) already has a meaning in the naturals, we’ll use \(\otimes\) to distinguish this new concept. to be the following collection of three objects, if it exists:

We also have the requirement that for every natural number \(x\) and every instance of the fact that \(x \leq m, x \leq n\) noteSuch an instance corresponds to the pair of maps \(f_A: X \to A\) and \(f_B: X \to B\)., there is a unique instance of the fact that \(x \leq m \otimes n\). noteThis corresponds to the map \(f: X \to A \times B\). In fact we can omit “unique”, because in a poset, there is never more than one arrow between any two given objects; in this context, there is only one way to express \(x \leq m \otimes n\).

Notice, by the way, that in this case, the category-theoretic product (i.e. the minimum) does always exist. Remember, the universal property comes with a caveat: it defines the product to be a certain triple of \((A \times B, \pi_A, \pi_B)\), if those three things exist. It’s by no means a given that the triple always does exist; but in this particular instance, with the natural numbers under the “less than” relation, it so happens that it does always exist. For every pair \(m, n\) of naturals, there is a triple \((m \otimes n, \pi_m, \pi_n)\) satisfying the universal property: namely, letting \(m \otimes n\) be the minimum of \(m\) and \(n\), and letting \(\pi_m\) and \(\pi_n\) be “instances of the facts that \(m \otimes n \leq m\) and \(m \otimes n \leq n\)” respectively.

We’ll give the product definition again:

Given natural numbers \(m\) and \(n\), we define the category-theoretic product \(\otimes\) to be the following collection of three objects, if it exists:

Again, a few minutes of pondering might lead you to discover that this is referring to the greatest common divisor, and again it so happens that it always exists.

Moral things to notice about the above examples

Working in a poset, the nature of the category-theoretic product as some kind of “optimiser” is a bit clearer. It is the “optimal” object such that certain conditions hold.

The property characterises the product up to isomorphism

This is what makes our new definition really make sense: this theorem tells us that our construction really does pick out a specific object. The proof appears on a different page; it follows a similar pattern to the “maps” way of proving that the empty set is uniquely characterised by its universal property.

Why is the product interesting?

Ultimately, this viewpoint shows us that the following ideas are “basically the same” (and it doesn’t matter if you don’t know what some of these mean):