Recall that there are three common interpretations of what it means to say that a coin has a 50% probability of landing heads: 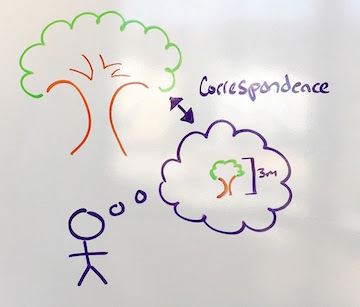 Definite claims in the model are called “true” when they correspond to reality, and “false” when they don’t. If you want to navigate using a map, you had better ensure that the lines drawn on the map correspond to the territory. 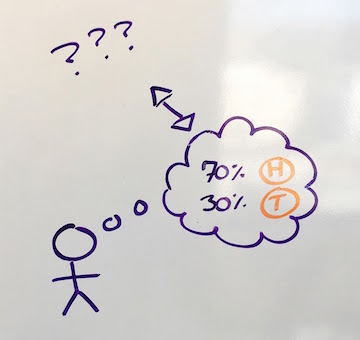 The advocate of propensity theory says that it’s just a brute fact about the world that the world contains ontologically basic uncertainty. A model which says the coin is 70% likely to land heads is true if and only the actual physical propensity of the coin is 0.7 in favor of heads. 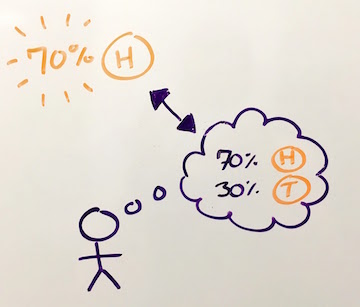 This interpretation is useful when the laws of physics do say that there are multiple different observations you may make next (with different likelihoods), as is sometimes the case (e.g., in quantum physics). However, when the event is deterministic — e.g., when it’s a coin that has been tossed and slapped down and is already either heads or tails — then this view is largely regarded as foolish, and an example of the mind projection fallacy: The coin is just a coin, and has no special internal structure (nor special physical status) that makes it fundamentally contain a little 0.7 somewhere inside it. It’s already either heads or tails, and while it may feel like the coin is fundamentally uncertain, that’s a feature of your brain, not a feature of the coin.

How, then, should we draw a correspondence between a probabilistic map and a deterministic territory (in which the coin is already definitely either heads or tails?)

A frequentist draws a correspondence between a single probability-statement in the model, and multiple events in reality. If the map says “that coin over there is 70% likely to be heads”, and the actual territory contains 10 places where 10 maps say something similar, and in 7 of those 10 cases the coin is heads, then a frequentist says that the claim is true.

Thus, the frequentist preserves black-and-white correspondence: The model is either right or wrong, the 70% claim is either true or false. When the map says “That coin is 30% likely to be tails,” that (according to a frequentist) means “look at all the cases similar to this case where my map says the coin is 30% likely to be tails; across all those places in the territory, 3/​10ths of them have a tails-coin in them.” That claim is definitive, given the set of “similar cases.”

By contrast, a subjectivist generalizes the idea of “correctness” to allow for shades of gray. They say, “My uncertainty about the coin is a fact about me, not a fact about the coin; I don’t need to point to other ‘similar cases’ in order to express uncertainty about this case. I know that the world right in front of me is either a heads-world or a tails-world, and I have a probability distribution puts 70% probability on heads.” They then draw a correspondence between their probability distribution and the world in front of them, and declare that the more probability their model assigns to the correct answer, the better their model is. 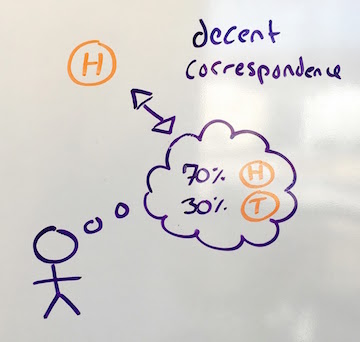 If the world is a heads-world, and the probabilistic map assigned 70% probability to “heads,” then the subjectivist calls that map “70% accurate.” If, across all cases where their map says something has 70% probability, the territory is actually that way 7/​10ths of the time, then the Bayesian calls the map “well calibrated”. They then seek methods to make their maps more accurate, and better calibrated. They don’t see a need to interpret probabilistic maps as making definitive claims; they’re happy to interpret them as making estimations that can be graded on a sliding scale of accuracy.

In short, the frequentist interpretation tries to find a way to say the model is definitively “true” or “false” (by identifying a collection of similar events), whereas the subjectivist interpretation extends the notion of “correctness” to allow for shades of gray.

Frequentists sometimes object to the subjectivist interpretation, saying that frequentist correspondence is the only type that has any hope of being truly objective. Under Bayesian correspondence, who can say whether the map should say 70% or 75%, given that the probabilistic claim is not objectively true or false either way? They claim that these subjective assessments of “partial accuracy” may be intuitively satisfying, but they have no place in science. Scientific reports ought to be restricted to frequentist statements, which are definitively either true or false, in order to increase the objectivity of science.

Subjectivists reply that the frequentist approach is hardly objective, as it depends entirely on the choice of “similar cases”. In practice, people can (and do!) abuse frequentist statistics by choosing the class of similar cases that makes their result look as impressive as possible (a technique known as “p-hacking”). Furthermore, the manipulation of subjective probabilities is subject to the iron laws of probability theory (which are the only way to avoid inconsistencies and pathologies when managing your uncertainty about the world), so it’s not like subjective probabilities are the wild west or something. Also, science has things to say about situations even when there isn’t a huge class of objective frequencies we can observe, and science should let us collect and analyze evidence even then.

For more on this debate, see Likelihood functions, p-values, and the replication crisis.