Does this lattice look at all familiar to you? From some other area of mathematics, perhaps?

In fact, this lattice corresponds to boolean logic, as can be seen when we replace b with true and a with false in the following “truth table”. 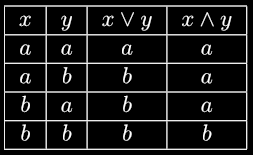