Lets say we have a bag containing twice as many blue marbles as red marbles. Then, if you reach in without looking and pick out a marble at random, the odds are 2 : 1 in favor of drawing a blue marble as opposed to a red one. 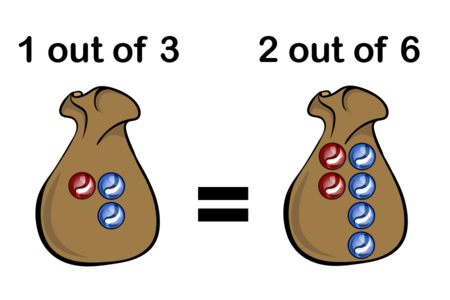 If there were also green marbles, the relative odds for red versus blue would still be (1 : 2), but the probability of drawing a red marble would be lower. 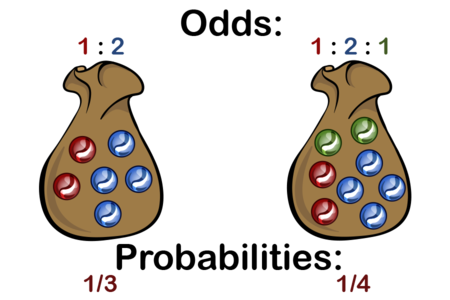 Note that if red and blue are not the only possibilities, then it doesn’t make sense to convert the odds \((r : b)\) of red vs blue into a probability. For example, if there are 100 green marbles, one red marble, and two blue marbles, then the odds of red vs blue are 1 : 2, but the probability of drawing a red marble is much lower than 1/​3! Odds can only be converted into probabilities if its terms are mutually exclusive and exhaustive.

Imagine a forest with some sick trees and some healthy trees, where the odds of a tree being sick (as opposed to heathy) are (2 : 3), and every tree is either sick or healthy (there are no in-between states). Then the probability of randomly picking a sick tree from among all trees is 2 /​ 5, because 2 out of every (2 + 3) trees is sick.

This process of dividing a set of odds by the sum of its terms to get a set of probabilities that sum to 1 is called normalization.