We’ve seen how to add and subtract pairs of rational numbers. But the natural numbers have another operation on them: multiplication.

From now on, my pictures of apples will get even worse: rather than being circles, they’ll now be squares. It just makes the diagrams easier to understand. 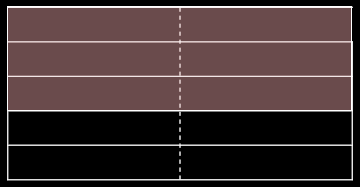 In the picture, we have two apples (squares) which I’ve drawn next to each other, separated by a dashed line. Then I’ve taken \(\frac{3}{5}\) of the whole shape (shaded in red): that is, to the group of two apples I have done the procedure that would create \(\frac{3}{5}\) if it were done to one apple alone.

Notice that while it was fairly obvious that order doesn’t matter during addition (that is, \(\frac{a}{m} + \frac{b}{n} = \frac{b}{n} + \frac{a}{m}\)), because it’s simply “putting two things next to each other and counting up what you’ve got”, it’s not all that obvious that the product of two fractions should be independent of the order we multiplied in. However, you should check, from the general expression above, that it actually is independent of the order.

What would we get if we rotated this diagram by a quarter-turn? 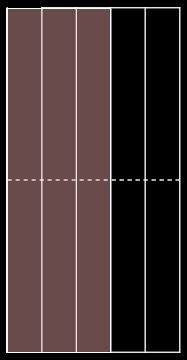 But wait! The shaded bit is just what we get when we do the procedure that makes \(2\) (namely “put two copies of the shape next to each other”), but instead of doing it on the single (upper-most) square, we do it to the version of the number \(\frac{3}{5}\) that is represented by the shaded bit of the upper-most square! And that is exactly what we would do to get \(\frac{3}{5} \times 2\).

Meditation: why the notation makes sense

Remember that we had “anti-apples” as a way of making nothing ($0$) by adding to some quantity of apples. In a similar vein, we can “invert” multiplication.

We’ve seen how this definition follows from the instant rule. Where does it actually come from, though?