Log as the change in the cost of communicating and other pages give physical interpretations of what logarithms are really doing. Now it’s time to understand the raw numerics. Logarithm functions often output irrational, transcendental numbers. For example, \(\log_2(3)\) starts with

The values of the logarithm base 2 on integers from 1 to 10.

The log lattice is this giant lattice assigning a specific number to each number, such that multiplying on the left corresponds to adding on the right. 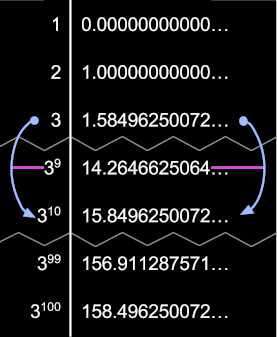 An illustration of some of the connections between the logs base 2 of powers of 3.

In fact, the constraints on this log lattice are so tight that there’s only one way to do it, up to a multiplicative constant. You can multiply everything on the right side by a constant, and that’s the only thing you can do without disturbing the structure. For example, here’s part of the log lattice viewed in base 3:

It’s exactly the same as the log lattice viewed in base 2, except that everything on the right has been divided by about 1.58 (i.e., multiplied by about 0.63).

What are logarithms doing? Well, fundamentally, there is a way to transform numbers such that what was once multiplication is now addition. If you were going to do multiplication to some numbers, you can transform them into this lattice, and then do addition, and then transform them back, and you’ll get the same result. There’s only one way to preserve all that structure, although if you want to view the structure, you need to (arbitrarily) choose some number on the left to call “1” on the right. Given that choice \(b\) of translation, the log base \(b\) taps into that intricate lattice.