\((x + y) + z = x + (y + z)\) for all numbers \(x, y,\) and \(z.\) Thus, addition associates. One easy way to see this fact is to consider a physical system that implements addition, e.g., by taking two piles of poker chips (where a poker chip with \(n\) chips represents the number \(n\)) in on two input belts, and producing a pile of poker chips on the output belt. This function can be implemented by simply shoving both input piles onto the output pile. Clearly, when combining three piles, it doesn’t matter which piles get shoved onto the output tape in which order, so addition is associative.

Imagine a physical system implementing multiplication, by taking stacks of poker chips as input (where stacks with \(n\) chips in them represents the number \(n\)), and producing an output by putting a copy of the left stack on the output tape for every chip in the right stack. Imagine using this function to combine three stacks of poker chips, a blue stack (representing \(x\)), a yellow stack (representing \(y\)), and a red stack (representing \(z\)). We can either calculate \((x \times y) \times z\) or \(x \times (y \times z).\) In both cases, the result will be a bunch of copies of the original blue \(x\) stack. The question is, how many copies will there be in each case?

Concatenation is an example of an associative function that is not commutative: When reducing a list of strings to a single string, it doesn’t matter what order you combine adjacent elements in, but it does matter that you leave the elements in their original order.

In fact, any function that just sticks its inputs together (possibly with some extra stuff in the middle) is associative: A function which takes wooden blocks as input, and glues them together (with a small white block in the middle) is associative, because if you put in blue, yellow, and red blocks then you get a blue-white-yellow-white-red block out the end, regardless of the order you combine adjacent blocks in.

Functions with a history

The function xconcat that concatenates its inputs and puts an “x” on the front: xconcat("A", xconcat("B","C")) = "xAxBC", but xconcat(xconcat("A", "B"), "C") = "xxABC". The problem in this case is that the output carries a trace of which adjacent elements were combined in which order, which makes the function non-associative.

In fact, any function that carries a history of the application order with it can’t be associative. Thus, if the inputs carry history about which inputs were combined with which other inputs, and the output preserves (and adds to) that history, the function can’t be associative. Associativity is, fundamentally, about the output not depending on which path was taken to get to it.

Consider a person who is playing a game that works as follows. The board has three positions: red, green, and blue. The player’s objective is to complete as many clockwise red-green-blue cycles as possible, without ever backtracking in the counter-clockwise direction. 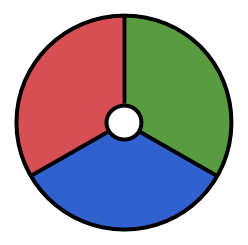 Each turn, the game offers them a choice of one of the three spaces, and they get to choose whether or not to travel to that square or stay where they are. Clearly, their preferences depend on where they currently are: If they’re on “red”, “green” is a good move and “blue” is a bad one; but if they’re on “blue” then choosing “green” is ill-advised.

We can consider a binary operation \(?\) which takes their current position on the left and the proposed position on the right, and returns the position that the player prefers. Specifically:

This function does not associate, because \((red\ ?\ green)\ ?\ blue = blue\) but \(red\ ?\ (green\ ?\ blue)=red.\) To show that a function is not associative, it is sufficient to simply do out the whole function table and then find any one case that violates the axiom of associativity, as above.